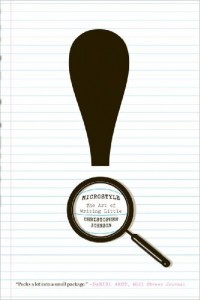 If you need to say something in just a few words – which is what happens when you coin a company name, slogan or domain name – it’s a mistake to try and cram as much literal meaning as possible into the message.

According to Microstyle: The Art of Writing Little by Christopher Johnson, “a message isn’t a treasure chest full of meaning. It’s more like a key that opens doors.”

To put this another way, the right choice of words can spark off a chain of mental connections – such as through connotation and metaphor – that then paint a picture.

This is why company names such as Apple and Blackberry work well, whereas a company called “Small handheld device that makes calls” wouldn’t. As Johnson explains, there’s a difference between writing for clarity as opposed to branding.

It’s when Johnson, who trained in linguistics, talks about branding that this books stands out. Each chapter illustrates at least one interesting concept that marketers should take note of, such as the section that talks about how saying the wrong thing can actually work well. For example, a literal mind might consider Virgin a bad name for an airline – after all, you’d want pilots and mechanics to be experienced – and yet the brand still works.

Posted byDan Kaufman
1
0
Share:
The beauty of short sentences (and how to use them)
The Elements of Eloquence – book review