How to cut copy (and why it should bring you joy)

As a contradictory person, I used to be both annoyed and pleased as an editor when writers would send me copy that was far longer than I’d commissioned.

I’d be annoyed because when an editor asks for a certain number of words, then it’s the writer’s job to deliver exactly that. Anything else is unprofessional.

And yet another, perhaps more pragmatic, part of me would be pleased – because one of the easiest ways you can improve copy (whether it’s your own or someone else’s) is by cutting it.

It’s odd that so many writers loathe cutting their own copy because it’s actually the best thing you can do – after all, it allows you to distil the essence of what you’re writing. And if you’re one of the poor deluded souls who believes everything you write is golden, then forcing yourself to cut might just snap yourself out of the trance you’re in.

In the old days when everyone wrote for print, there had to be word count limitations – you can only fit so much on a page, or half a page. This forced editors and writers to cut out the fluff. Now that the web allows us to write as much as we want, however, we need to impose some self discipline instead.

Repeat after me: everything can and should be cut, even if you’re happy with it. First drafts can often be cut in half without losing any real meaning – and even your fourth or fifth draft can be cut further.

So what should you cut?

Anything you think is formal, boring, or is only there because “that’s the way things are done”.

Introductions that state the obvious. For that matter, any statement that the reader already knows should be cut.

Repetitions. This seems obvious, but I see it all the time. When you proofread your copy, circle any repeated words. Don’t just replace the repeated word with a synonym. Instead, see if you can restructure so the repetition isn’t needed.

People sometimes deliberately leave repetitions in, thinking it’s not so bad, or that they’re driving home a point – but it’s usually just bad writing (with the exception of poetry and speechwriting – in which case, the repetition needs to be done carefully).

Repeated facts, ideas and statements should also ring alarm bells. Unless there’s a great reason for it, delete it.

Watch out for the word “I” or “we” – instead, make the writing about the reader or the topic.

Quotes can often be deleted and paraphrased. In a feature or news story, for example, it’s important to have some key quotes from someone – but it’s a mistake to just fill the story with their quotes when many can be cut or paraphrased to make the story flow better.

Cliches, weasel words, jargon and vague sayings or words. If you want to say something, be specific. You can even make something longer if it means adding detail or specifics. If not, then cut.

Anything you don’t entirely understand. If you’re editing someone else’s work, for example, and you see a word or phrase that you don’t know the meaning of, either clarify or delete. Remember the well known editing phrase: “When it doubt, cut it out.”

Anything a reader doesn’t need or want to know. Effective communication puts the reader first. If you’re writing for the web, then think about what someone would type into Google to get to that page.

And as anyone who’s studied grammar – or went to one of my workshops – can hopefully tell you, avoid adjectives and adverbs unless they make your sentence more precise. Delete words such as very, really and quite. Instead of using an adjective or adverb, try to use a more specific word instead. Don’t say “he was really upset” when you can say “he was sobbing”.

Got any other cutting tips? If so, leave a comment:

Learn more by enrolling in the Writing Essentials online masterclass

Study at your own pace, whenever and wherever you want.

Taught by a former newspaper editor and journalist, this masterclass is suited for anyone who wants to improve their writing – whether it’s for marketing, journalism, blogging or PR. It’s also ideal for those who want to improve their general writing skills.

It teaches all the basics, including:

It’s filled with practical exercises that allow you to put theory into practice. 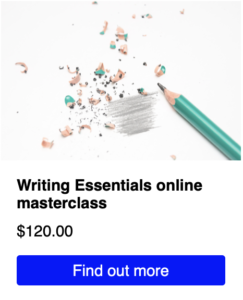